I found this field trip to the Crocodile Park (CP) surprisingly entertaining!
The park runs bird shows and exhibition stunts (with live huge crocodiles) Wednesdays to Sundays at 4pm - so make sure you are on time for the show schedules before heading to CP.
The location is dusty and quite run down, but the shows were A+.
In fact, I found the CP's Super Bird show more engaging compared to the Ocean Park HK bird show I have seen.  I honestly enjoyed my Manila bird show more (then maybe it could  be because, the Manila show was in Filipino - figures!). 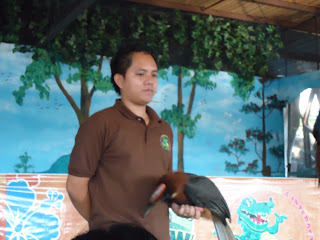 After the bird show the group was led to the crocodile breeding area and treated to a stunt exhibition of a dancing tight rope artist (did I mention that the rope was suspended across a pool filled with crocodileS?).
I can't hardly breathe, while the poor man crossed the tight rope doing various stunts in between!  The closest I have seen such a stunt was when we went to Thailand and a crocodile handler placed his head inside the crocs mouth (crazy!).
So scared Manong Tight Rope Artist would fall and end up as chow for those sharp teethed crocodileS, in front of the kids!
(I was so afraid to death watching, I forgot to take pictures!  But instead of checking out the pix, I suggest you just go there and see for yourself what I mean) 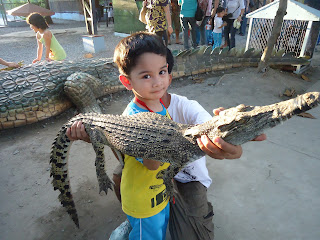