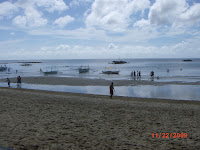 For my birthday weekend, last November 21, my family (my husband, 2 sons ages 5 and 1, my sister and a yaya) a cousin and his family and an aunt with her newly wed daughter packed a car and an APV and headed for Laiya, San Juan in Batangas!

It was a cool saturday morning with a little drizzle of rain! Which was good since we left Manila at 8am and we were looking forward to a hot mid day travel.

We arrived at Kabayan Beach Resort a little after 12. But since check in was not until 3pm, we were asked to wait in a shed by the beach, while the attendants ready our accommodation. We were staying at Ilang-Ilang (its a 2 br, 1 tb, with porch and kitchen good for 12 pax). The place was right next to the beach, it is not even 15 steps away. At 1pm, the attendants were so nice they allowed for an early check-in. By 1:30, we were all settled in. We brought binagoongan and adobo from Manila and had our fill, before frolicking again by the beach by around 4pm.

My kids were running all over the beach stretch by 5pm. The water was luke warm considering it is November, but since I have kids along I decided to have them out of the water before 6pm.

We are back eating dinner by 630 and then mass at 7pm (Kabayan has a small chapel within the resort and the have an anticipated mass). By 8pm the kids were knocked asleep, while the adults played a game of pusoy dos. To make the game more exciting we would bet 1peso/player (although the bet doubles if the winner ends with a 2). After 5 hours and being 50bucks richer (he,he,he, guess I am good at it) we called it quits!

I could have slept until 9am, if not for my 1 year old, who was up at 4am begging to go out and play in the beach! Duh it was just 4am... I tried to put him back to sleep, but you know these toddlers right? He would fall asleep, but would wake up every after 30mins. Finally at 6am, after convincing myself that my son is not going back to sleep anymore, I decided to give in!

We were out by 630, and I am so happy I did not sleep it off. Because it was such a beautiful sight to behold! The day was perfect and the ocean stood still. I also noticed that the water receeded some 3-4miles back and took with it the peebles and hard sand. What was left was fine sand, so fine I had no qualms in allowing my 1 year old walk barefooted. 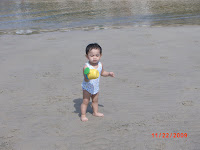 The others (my sleeping companions!!) were finally up by 730. We were just sitting by the beach, with the kids running around and enjoying it all. Before, we know it it was finally time to pack up and get ready for a way back to Manila.