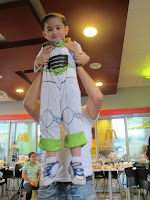 My son is such a Toy Story fanatic. He loves Woody, Jessie and simply adores Buzz!
I was therefore not surprised that he insisted on a Toy Story themed birthday party for his 3rd birthday celebration. 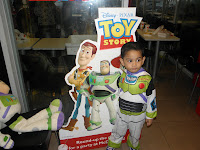 We had our party at the Mc Donald's ValleyGolf (Ortigas Extension) and availed of their Toy Story Birthday Package. They have a play area which I thought was perfect for the children guests, however the parking is a little limited and could be a problem. 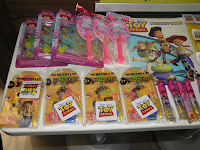 The P3000 party fee includes:
- a gift for the celebrant
- 30 invitation cards
- 30 party name hats
- 30 traymats
- 30 balloons
- 30 giveaways
- game prizes
- a character appearance (we had two - Grimace and Birdy)
Unfortunately the cake McDonald's includes in the package is not Toy Story themed and since I wanted to stay true to my theme, I did a little internet research. I found this cool Woody cake from the web and asked my favorite bakeshop to customize a Buzz for me. 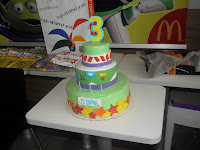 Iko's Bakeshop never fails to impress! Iko's Bakeshop have branches in Caniogan, Pasig / SM Megamall Supermarket (contact number 409-1197/468-9583/628-4383).
For my son's Buzz Lightyear costume (which he loves so much and insisted in wearing to bed since we got it), I got on line though Sulit.com.
It was supposed to be a hassle free partying, however, celebrating in a newly opened branch wasn't exactly a good idea. They were obviously undermanned and there seems to be nobody orchestrating the whole thing. To make it worst this branch held two parties together. It was a real riot. I could see the other party's guests unattended without a place to seat. The mother was looking for staff assistance, but there were none in sight. Service was real slow and to think I placed the right number of orders.
My consolation is that my party host was nice and while I was ranting about the poor service, she was simply apologetic and tried her best to appease this monster mother! 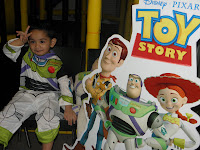